Gnome Man’s Land is home to Millstone Trails’ most challenging terrain. Many of these trails are built specifically for mountain biking, although all of them are viable routes for pedestrian travel as well.

Gnome Man’s Land is accessed primarily by the Grand Lookout, although it can also be reached from several locations along Websterville Road, including from the Barre Town Middle & Elementary School.  Gnome Man’s Land is arrayed across the northwest slopes of Millstone Hill, which gives the trails plenty of elevation to play with. An active quarry road cuts through Gnome Man’s Land. This road is used by heavy trucks and equipment servicing the local quarries and Barre Town’s water district. USE CAUTION when crossing the road and do not loiter on the road. 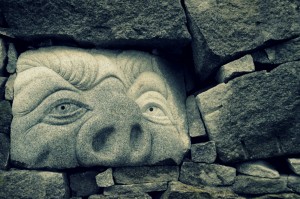 The Grand Lookout is the scenic and historic icon of the Millstone Trails. Standing atop the towering granite grout pile (grout is the old Scottish word for waste granite) one is treated to an expansive and dramatic view stretching from Lincoln Gap in the south to Jay Peak in the north, with Camel’s Hump and Mt. Mansfield in the middle. On the way to the Grand Lookout, be sure to stop and take note of the sculptures carved by local Barre artists the interpretive signs describing historic quarrying techniques and equipment.

After taking in one of Vermont’s most spectacular views (stretching from Lincoln Gap in the south to Jay Peak in the north) at the Grand Lookout, most visitors to Gnome Man’s Land descend Roller Coaster and Screaming Daemon, two down-hill oriented, each with several built features. BE ALERT, Screaming Demon has a number of gapped jumps, each with an accompanying ride-around. 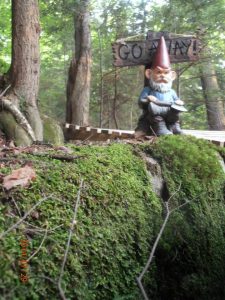 Abbott’s Run and Rock and Roll parallel each other and run along the base of Millstone Hill. They both cross several railroad tracks and numerous relics from quarrying. Abbott’s Run is substantially easier to travel than Rock and Roll. Both trails lead to Beaver Run and the Nature Trails near Barre Town Middle & Elementary School. Abbott’s Run and Beaver Run provide the only easy biking and walking in Gnome Man’s Land. These trails often have evidence of the wildlife that lives in these often wet areas in, including moose, beaver, bear, porcupines, and skunks.

Harrington Heights, Harrington Ridge, and Vortex are the most famous mountain biking trails in the Millstone network. These trails feature our most technical challenges, including steep climbs, long continuous stretches of exposed granite, constructed bridgework, loose rocks, and slippery roots. The downhill end of Angry Gnome joins Harrington Heights at its highest point.